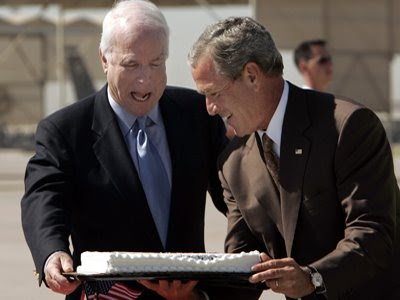 On the very day that Hurricane Katrina hit New Orleans, what was John McCain doing?

Meeting with President Bush, who delivered McCain a birthday cake.

McCain makes a big deal of late about how he would have handled the disaster, but the facts are:

McCain voted against relief measures for Katrina victims multiple times, as well as voting against an investigation into the failures of the government response. McCain also voted against providing additional funding for first responders' communication systems. . .

In the primaries, I supported Hillary Clinton; even donated some money to her campaign.

But when Obama won, that was OK with me -- and I'm getting involved in the campaign. The important thing is that we not have a continuation of the last eight years.

Which makes me increasingly iirritated at the hold-out Hillary supporters I see being interviewed on television coverage of the Democratic convention.

This is the height of self-absorption. One person being interviewed said that they were expecting respect from the Democrats and not to be told to "get over it."

Well, there's just no other way to say it but GET OVER IT!

She also said that she was a lifelong Democrat, but hadn't ruled out voting for McCain.

So let's see, Hillary wants you to support Obama; Obama's platform is almost identical to Clinton's; McCain and the right-wingers are opposed to everything the Democrats stand for, but you're still considering voting for him?

Go away you moron.

There's no question that if you judge the candidates on their actual lives, rather than mythologies, the Obamas are extremely mainstream and conservative. Married for life, great parents, very humble beginnings, driven meritocrats. No divorce or adultery - and regular religious attendance and faith. And yet they are tagged as elitists and radicals. Yes, they're liberals in policy, although not radically so. But they're conservatives in their lives.

The same paradox can be seen in Obama himself: a policy liberal but a temperamental conservative. To see the Obamas as they are requires us to see them in these paradoxes. And to recognize that they may not be paradoxes at all.

Over at the Volokh Conspiracy, David Bernstein spends some time comparing the law school standings of Joe Biden and Dan Quayle to make the point that . . . well, it's not clear what point he was trying to make.

Later, to bolster his argument, which he says is that " . . .Republicans are subject to a different standard re intelligence than Democrats," Bernstein tries to seal the deal by quoting, Ann Coulter.

I think if I was a law professor I would be reluctant to admit that I read Ann Coulter's books, much less citing them as evidence for anything.

Too Close for Comfort

Glenn Reynolds has a "Heh" for a "gun-toting 85-year-old" who stops a thief almost 400 miles away near Pittsburgh, but has nothing to contribute on the high school shooting that occured about six miles from his campus.

Or on any of the other incidents involving guns at Knoxville schools.

A Man of the People

He feels your pain: McCain unsure how many houses he owns

No wonder he isn't interested in taxing the rich.

How the Game is Played

The quickest way for either of the presidential candidates to lose the election is to be honest about the bigger picture of the conflict in Georgia.

The honest answer? That we have alliances that we cannot sustain and promises (overt and implied) that we cannot keep. Let's leave out, for now, the supposed strategic reasoning behind this overreaching.

Even if the American military was not tied up in Iraq and Afghanistan, the United States would have virtually no ability to project military force into an area such as Georgia.

But it is not just Georgia. The United States has, over the past decade, sought to create allies in various unstable countries on Russia's southern periphery at the same time that NATO is expanding eastward.

This may have worked while Russia was down, but as Jim Kunstler noted:

It's one thing that US foreign policy wonks imagined that Russia would remain in a coma forever, but the idea that we could encircle Russia strategically with defensible bases in landlocked mountainous countries halfway around the world...? You have to ask what were they smoking over at the Pentagon and the CIA and the NSC?

So, this asinine policy has now come to grief. Not only does Russia stand to gain control over the Baku-to-Ceyhan pipeline, but we now have every indication that they will bring the states on its southern flank back into an active sphere of influence, and there is really not a damn thing that the US can pretend to do about it.

But a candidate who might point this out to the American public would be instantly vilified as a weakling and as unfit to be commander-in-chief.

Better to stay with a tough sounding but failing policy, than to accept reality and move on to a more promising strategy.

"The insinuation from the Obama campaign that John McCain, a former prisoner of war, cheated is outrageous."

This from a McCain spokeswoman in response to suggestions by journalists and bloggers that McCain may not have been in the so-called cone of silence during Obama's questioning by Rev. Rick Warren Saturday evening.

It appears that while McCain professes to be hesitant to speak about his experiences as a prisoner of the North Vietnamese (a hesitancy not exhibited at the Saddleback debate), his staff is free to use it to deflect all questions.

Obama's answers appealed to the head; McCain's to the heart. Obama tended to answer the questions, as they were asked; McCain often strayed into small stump speeches. Obama addressed Rev. Warren; McCain, the audience. Obama was more nuanced in his answers; McCain more dogmatic.

I liked the format -- and the questions. They avoided the "gotcha" queries of other debates where candidates were presented with some quote from the past and asked to justify it. Rather, in this format the candidates were asked their thought process on larger issues, for the most part.

I've long though that the most important question we could ask our presidential candidates is, "What is your view of human nature? Is the role of government to create conditions to let people's natural goodness come forth, or is it to restrain the barbaric impulses that are intrinsic to our being?"

On the Wagon and in the Cockpit

I'm sure we'll soon be hearing the arguments for a pre-emptive strike to negate this Sino-threat before it is too late.

Remember the right-wingers charging Obama with acting prematurely presidential on his overseas trip? Wonder what they have to say about this?

Sen. McCain has just announced that he's sending his own delegation to Georgia (Sens. Lieberman and Graham). . .

He's despatching Lindsey and Joe as emissaries to the country immediately. He's on the phone with Sakashvilli daily. He's giving press conferences. He's warning of a new Tsarist empire. You can tell what sends him into high-energy zones: a clear enemy abroad. He knows black and white; and he knows war. It gives him clarity and strength. Up next: Iran and China. Oh, the conflicts we can have ...

And from Betty Cracker:

It seems to me that as Russia invades Georgia, the market convulses, Kashmir heats up, Musharraf falls, and our President, after fucking off to the Olympics all weekend, makes obviously toothless grimaces over South Ossetia while much more effectively sabotaging the Endangered Species Act, that even the Republicans would find it hard to tell people that their greatest danger comes from a Presidential candidate whom people like too much.

It's Safe for Chickenhawks Again

The conflict in Georgia has provided the tough guys plenty of opportunities to show off their strategic acumen.

All over the internet you can read suggestions on how the Geogians might prolong the fight, why the the United States should provide military assistance and, of course, why the Europeans are ungrateful cowards.

For a taste of this sort of war gaming, go here. The comments are not to be missed. My favorite?

This is easy enough to fix. Bush merely has to call Putin and give him 5 minutes to explain why the US shouldn’t give Georgia a handful of nuclear weapons and delivery systems capable of reaching Moscow. They could threaten to do likewise with various bad actors but I don’t think even Putin is stupid enough to down that road when the easy way out is to just pull back.

Naturally, the one thing you won't read on these blogs is "Let's volunteer to be in the front lines."

Their front line fight is more likely to be at the Golden Corral lunch buffet.

Digby looks at the Veterans Affairs policy that makes it difficult for disabled veterans to register to vote . . . and sees a sinister purpose.

Glenn Reynolds: "BUSH TO RUSSIA: Back off Georgia. We'll see how much impact this has."

I'm sure the Instapundit goes to bed at night dreaming of F-22s in the sky over Georgia, turning back the Russian bear. But then he can do so knowing that there is no real risk that anything dangerous is going to happen to him.

The St. Petersburg Times' Howard Troxler on the inner workings of Florida's Amendment 5:

Yaaay! A 25 percent property tax cut! Who could be against that?

Here's the thing. If we cut school property taxes by 25 percent, that is gonna whack something like $9-billion to $11-billion out of the education budget in this state.

Do we have a plan for how to make up that money for the schools? Yes, we do.

Here is the plan:

We'll figure that part out later.

If this constitutional amendment passes, it will be proof positive that we are unable to govern ourselves.

Georgia on My Mind

Although I am not making excuses for Russia, I do think that the fighting there is partially the result of the effort to bring Georgia into NATO.

Look at the United States' response to perceived threats to it from small Caribbean and Central American nations. How much more could we expect Russia to fear a Western alliance member on its doorstep?

Update: Here's something that won't happen often -- I'm in agreement with a sentiment expressed in The American Conservative magazine:

". . . I find the charges of Russian imperialism a bit tired coming from people who have insisted for years that invading other countries, toppling their governments and setting up puppet states is not imperialism"

On a more shallow note, James Lileks takes the opportunity presented by the conflict in the Caucasus to point out organizations such as the Green Party, the World Socialists and the Socialist Party USA are not protesting the war. The only reasonable explanation Lileks can come up with is that they are getting ready to protest an Israel attack on Iran.

In a rare moment of self awareness, Lileks ends his wanderings with this: "I don't know what to do about Georgia . . . . In case you're curious. It's complicated."

Then he's on to an analysis of the X-Files movie.

The only black reporter covering a McCain rally in Panama City is removed from the site.

What is it About Blonds?

James Wolcott on McCain's use of the two blonds:

Regardless of the racial-sexual subtext being purveyed, referencing Britney Spears and Paris Hilton seems a bit tired and dated, the older generation scolding the younger. Picking on Spears in a political ad seems like poor sportsmanship (she's hardly done the harm to the culture that Ann Coulter has), and in her wealth, privilege, and lathed blondness, Paris Hilton resembles a younger version of Cindy McCain--there's an almost daughterly resemblance, an enjoined twirl of ruling class DNA.

Actually, he has five neatly numbered points about the ad that underscore Obama's comment, "Is that the best you can do?"