Wind and rain continue this morning, but otherwise little evidence that Ernesto had passed through last night.

Now I'll be waiting for the news report that someone set his house on fire as a result of storing a dozen five-gallon containers of gasoline in his garage.

If you still have any illusions that the Bush Administration is not the most incompetent in our nation's history, read Peter Galbraith's "Mindless in Iraq" in the most recent online edition of the New York Review of Books.

Mark Kleiman notes that many of our nation's problems are becoming more difficult to understand as "the capacity of the Federal government to know what's going on in domestic policy is being systematically dismantled as one data-collection effort after another is zero-funded."

He doesn't find this to be anything other than a conscious effort on the part of the right: "This is driven at least in part by conservative ideology: the right seems to think that the less we know about problems the less we'll be tempted to try to do something about them."

Sgt. Schultz would be proud.

The first rain band has just arrived and the wind is picking up, although my neighbor's political yard sign is holding fast.

My next door neighbor had impact resistant windows installed after Wilma, and so his house was quiet this morning as I put up just enough storm shutters to placate my wife.

Not satisfied with the Republican or Democratic candidates for Governor of Florida?

Not to worry . . . you will have plenty of choices in the November election beyond the two individuals from the major parties (who at this time appear to be Crist and Davis).

Other candidates who will be on the ballot:

Quite a diverse lot. Check out their websites -- some have very interesting backgrounds (a couple Ph.D.s), some are running on a single cause, others are quite near tinfoil hat status.

The award for honesty has to go to the Libertarian candidate, John Wayne Smith:

I have never been an angel and claim my mistakes as well as my successes. I have been divorced 3 times, fathered 4 children, and raised many more. I have been arrested for bigamy once (adjudication withheld-$502 in court cost). My only other arrest has been for civil disobedience, too many times to tell. I spent 6 months in the Marion County Jail for refusing to buy a taxicab permit. I declared bankruptcy in 1978 and have over the years refused to pay some bills that I thought were unjust. I have made my share of mistakes and have tried to learn from all of them. I hope I have. 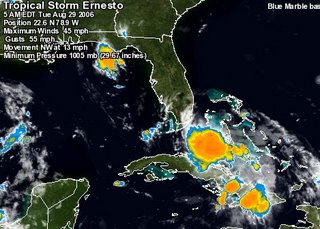 The contest for the Florida House of Representatives in District 95 took a step down when local voters received copies of newspaper articles critical of candidate Jim Waldman in their mail.

The mailings have no return address, and no attribution to any candidate or independent political action organization. It would seem to me that this violates Florida's election law.

The articles were copies of articles written by Bob Norman for the Broward/Palm Beach New Times, an alternative weekly newspaper, and were originally published in March and April of this year.

The articles are the usual Bob Norman smear-job: heavy on insinuations and suppositions but no proof. Much like Karl Rove, Norman throws out charges and places the burden of proof on his victim.

For instance, Norman questions whether Waldman is a true Democrat since prior to 1982, he was a registered Republican. I guess he's been undercover for almost a quarter of a century.

According to Norman, Waldman's Democratic credentials are suspect because he has received campaign donations from some of his clients who are members of the GOP.

Another Norman tactic is to link Waldman to someone who has run afoul of the law, even though there is no evidence of wrong-doing on Waldman's part; in other words, guilt by association.

I hope that this mailing was not the work of any of the candidates for the District 95 seat -- let's leave the Rovian campaign tactics to the Republicans.

The Right Kind of Enemies

Here's a good reason to support Democratic candidate for Governor Jim Davis: the sugar lobby is against him.

If you care about the welfare of Florida, I don't think you can go wrong in taking the opposite side of any issue that the sugar interests support.

Ron Gets to the Heart of the Matter

Apparently, Shaw thinks that linking him with the Bush Administration is "hitting below the belt."

The Broward County Commission agreed to put a one cent sales tax for transportation on the November 7th ballot.

Heaven knows that Broward need to get going on mass transit -- we cannot keep building (and widening) roads -- but I have my doubts that this will prove to be the answer to our problems.

For one thing, the measure passed on a narrow 5 to 4 vote; tax hike of this sort needs consensus. Kudos, however, to Mayor Ben Graber for supporting the tax -- he's campaigning for the State Senate but refused to duck the vote and avoid giving his opposition an opportunity to use it against him. It's refreshing to see a politician who does not put the fear of being labeled in favor of "raising taxes," ahead of the community's well-being.

The other concern is that in order to curry favor with voters throughout Broward County the transportation infrastructure to be funded by the new tax will be diluted so as to insure that every locality gets a piece of the pie.

As far as I'm concerned, the most critical need is commuter traffic on the FEC railway line; I'd rather all the money go to that project than to have it dispersed to provide a little bit here and a little bit there.

I'll vote for the new tax, but I'm not sure enough Broward County residents are willing to invest in something that they feel will not affect them directly. The job of the County Commissioners is to show the citizenry why this is good for everyone.

To the Capsoff campaign, that is.

If we must retain the Caps Lock key, why not put it up at the top, as one of the function keys.

Apparently Target was closed, giving James Lilek too much time on his hands.

This inevitably leads to his channeling Captain Queeg, proving with geometric logic that Americans have no reason to complain about anything, at least until our problems rise to the level of Stalin's police state.

Oh, that we could not emulate the fine qualities of a cartoon mouse, he laments.

A Kiss is not Just a Kiss

Alachuapolitix misses the boat in analyzing the Leiberman defeat in Connecticut, characterizing it as the consolidation of far left control of the Democratic Party.

Nonsense -- to paraphase an old political phrase, "It's the War, Stupid."

Not so much any particular stand on the war as much as Lieberman's failure to hold the Bush administration to account for its horrible mismanagement of the conflict.

The rodents are claiming they always knew that the vessel wouldn't float.

With Malice to All

Roy Edroso takes on (once again) the suggestion that the major media are being made irrelevant by advances in technology that produce citizen journalists:

But let us cut the crap. The general trend of our media criticism, online and off, is and has been for some time neither technological nor futuristic but political -- a concerted attack on the famed "liberal media," a hydra-headed beast so insidiously powerful that it has managed to deliver the White House to its Democratic overlords in all but seven of the past ten Presidential elections.

Of course the so-called MSM's diversity guarantees that the usual right-wing pinheads will find something to complain about.

Come to think about it, maybe that's what their complaint is, in fact -- diversity.

That's a dramatic change from 1990, when three out of four Broward residents were non-Hispanic whites.

The number of minority residents in the county is expected to reach about 63 percent by 2030, according to independent estimates by state officials. The total county population is about 1.8 million.

Much of the county's population increase has come from the Caribbean and Latin America (a significant portion of which is not Hispanic), but one finding that surprised me was that

Since 2001, more black people have come to Broward each year than to any other county in the United States, according to the census, increasing the county's black population by almost 85,000 people between 2000 and 2005.

We live in interesting times.

Castro - More Confusion to his Enemies

The news of Fidel Castro ceding power to his brother came about halfway through Two and a Half Men last night -- now I may never know what happened to Charlie's brother.

Naturally, even in this, the wily Castro is pulling the strings.

Best comment from "the street" was from a 30-something male on Calle Ocho who stammered, "Finally, Cuba will have a chance to return to democracy." (paraphrased, of course).

In any case, the best comment I've read so far is from Michael Froomkin.

I don't get the feeling that Ron Klein is getting enough traction in his race against sitting Congressman E. Clay Shaw for the Broward/Palm Beach House seat.

Shaw is a difficult person to run against, especially in a tailor-made district. He (Shaw) doesn't have a lot of rough edges, and although he sides with the President on almost all issues, he doesn't come off as doctrinaire.

I watched Klein on Channel 10's This Week in South Florida with Michael Putney last Sunday, and Klein just didn't seem to have any fire in his belly -- no compelling reason a long-term congressman with loads of seniority should be thrown out.

It's time for Klein to let the public know what supporting the president really means.

In the case of Iraq, just a few minutes before This Week in South Florida aired, Fareed Zakaria had a good suggestion:

[If I were running against conservatives,] I would make up a campaign commercial almost entirely of Donald Rumsfeld's press conferences, because the man is looking - I mean, it's not just that he seems like a bad Secretary of [Defense]. He seems literally in a parallel universe and slightly deranged. If you listen to what he said last week about Iraq, he's living in a different world, not a different country.

Come on, Ron. It's time to hold Shaw's feet to the fire -- if he supports the president, then let him try to defend what has happened (and the people who made it happen).